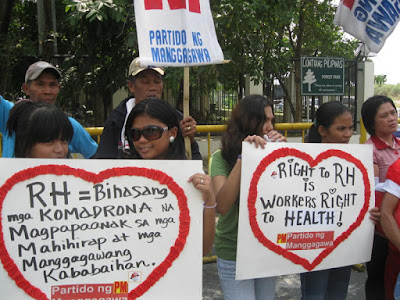 Indignations against the slashing of the P1B budget for contraceptives continue to grow, with the labor partylist group calling for its restoration by any means available in the legislative and executive department.
Scores of women members of Partido Manggagawa (PM) picketed the Senate Building this morning to express their condemnation against its members, specifically Senators Sotto and Legarda, who initiated the cut based on flimsy grounds. The groupvowed more actions and a vigorous campaign until the budget cut is reversed.
The group argues that the deletion of funds for family planning commodities such as condoms, pills and IUDs will adversely affect the delivery of social services to poor and indigent families.
“The hard-won victory of the RH Law is now is being killed softly by legislative maneuvering of anti-women solons,” stated Judy Ann Miranda, secretary-general of PM and one of its partylist bets.  Miranda will join a presscon by pro-RH groups to condemn the move against the implementation of the reproductive health law.
“Ang RH law ay nasa tamang panahon, bakit ito kinapon?” read one placard of the protesters, referring to Lola Nidora’s line ‘sa tamang panahon’ in a polular segmentKalyeserye of a noontime show Eat Bulaga where Sotto is part of.
Another placard read: “Legarda, Ligaw na,” which is a swipe against Sen. Legarda who is known before to be pro-women.
“Sotto’s anti-RH position is a given but his latest action showed that he is not only number one in senatorial surveys.  He is also women’s enemy number one,” said Miranda.
Miranda said Sotto is issuing stupid arguments like condoms and pills as being abortifacients which were resolved issues during the long deliberations over the RH bills.
As to Legarda, Miranda said: Iba na siguro ang panahon (perhaps time has changed), as her argument for shifting the family planning budget to air defense was an outright betrayal to women cause.
The group said the House’s contingent to the Bicameral Conference Committee were equally responsible for this budget loss to women.
PM is calling for Quality Public Services in its electoral platform and one of its components include wider access of women to quality services, including reproductive health.