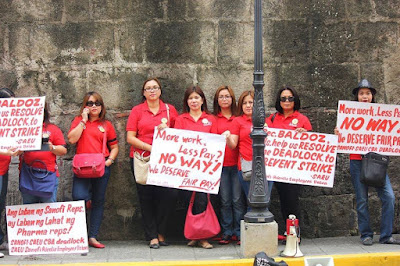 After days of nationwide protests and bringing the company on the verge brink of a strike, the med reps of pharmaceutical giant Sanofi Aventis (Phils) Inc. won their demand for a wage hike and concluded their new collective bargaining agreement (CBA). The CBA was signed by the union and management late last night after a marathon whole-day mediation meeting called by Labor Secretary Rosalinda Baldoz to avert a planned strike.

“What we were not able to achieve in four months of protracted negotiations at the table, we won in four days of nationwide protests in the streets. We owe this victory to the unity and activism of the union members, first of all, and then next to the solidarity of our sisters and brothers in the labor movement. Ang panalo ng Sanofi med reps ay panalo ng lahat ng manggagawa,” declared Lei Lucido, president of the Sanofi Aventis Employees Union (SAEU).

“The salary hike we obtained will ensure we remain at the living wage and that our compensation is competitive with our labor productivity and company profitability. Further, the CBA we have attained will hopefully set a benchmark that will benefit all workers in the pharmaceutical industry,” averred Joseph Corpuz, a SEAU officer.

Sanofi had been in the news recently because the Department of Health had ordered just for this year some P3 billion worth of anti-dengue vaccines that is solely manufactured by Sanofi. According to media reports, executives of the French-owned global company met President Benigno Aquino III on the sidelines of the Paris climate change talks ostensibly over the vaccine contract.

CBA negotiations between SAEU and Sanofi were deadlocked in October last year which led to a notice of strike. After the strike notice matured more than a week ago, SAEU organized daily protests in the Sanofi office in Makati and the cities of Angeles in Pampanga, Calamba in Laguna, Cebu, Iloilo, Bacolod and Davao. The mediation yesterday was billed by the union as a make-or-break meeting which would have led to a strike if no “fair deal” was reached.

Renato Magtubo, chair of Partido Manggagawa (PM), among the groups which supported SAEU, said that “The hard-won victory of SAEU is an inspiration and a lesson to colleagues in the labor movement. SAEU the David slayed the goliath Sanofi through unity and action. Sanofi blinked when it was brought to the brink of a strike that SAEU had prepared well.”

Aside from PM, labor groups such as the Philippine Airlines Employees Association (PALEA), Bayer Philippines union, Federation of Free Workers and Industri-ALL global union had participated in the Sanofi med reps mass actions.