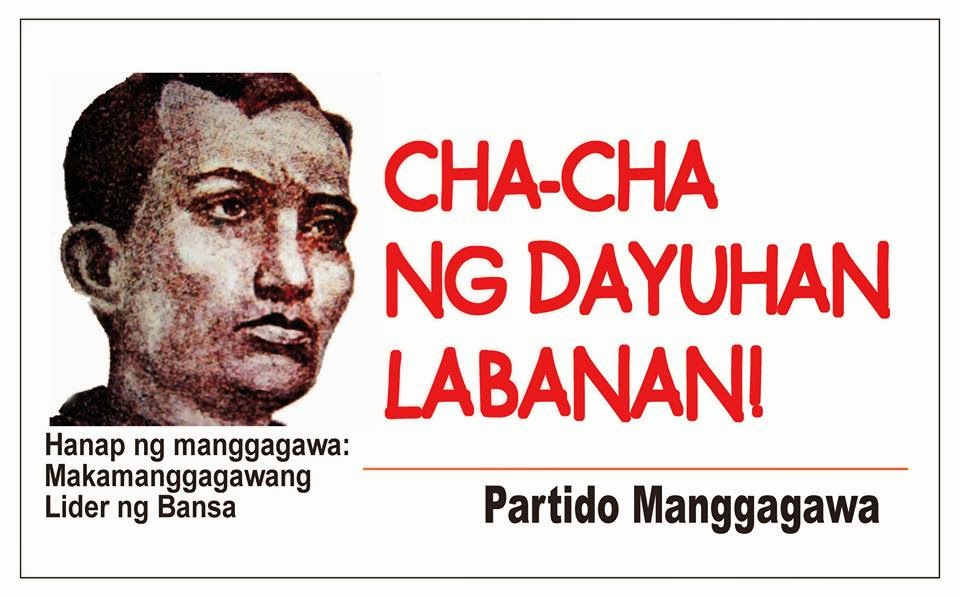 The rejection of the charter change move led by House Speaker Feliciano Belmonte will be a highlight of tomorrow’s big Bonifacio Day rally, declared the labor group Partido Manggagawa (PM).

“Workers oppose Belmonte’s economic cha-cha as it carries the same old agenda of giving foreign capital more flexibility and freedom in doing business in the country. While Congress makes an x’mas rush to vote on the chac-cha as demanded by foreign Santas, it gives a deaf ear to workers demands for enabling laws to the living wage and security of tenure provisions of the Constitution,” stated Wilson Fortaleza, PM spokesperson.

Several thousand workers from the groups comprising the labor coalition Nagkaisa will commemorate the 151st anniversary of the plebian hero Andres Bonifacio by marching from Welcome Rotunda to Mendiola tomorrow morning. Aside from opposing Belmonte’s cha-cha, workers will also criticize the anti-labor policies pursued or tolerated by the Aquino administration such as contractualization, cheap labor, high cost of power, and the deepening inequality created under the general condition of jobless growth.

“The motive force for the economic cha-cha is clearly exposed by the fact that Belmonte’s announcement of a pre-x’mas vote came right after the House leadership met with representatives of foreign chambers of commerce and local business groups,” argued.

PM vowed to mobilize workers in a campaign to fight the economic cha-cha. “The Bonifacio Day rally is the opening fire of the campaign to oppose Belmonte’s cha-cha and the Christmas holidays will not dampen workers resolve to resist this new attempt to tear up the token nationalist provisions of the Constitution,” insisted.

He added that “Belmonte and company is concocting an untested formula in constitutional amendments thru a joint resolution loaded with the sinister insertion ‘unless otherwise provided by law’ which can be utilized anytime the need for actual amendment arises. Belmonte’s cha-cha is surely waiting for an intense legal and extra-legal battle.”

The theme of Nagkaisa’s Bonifacio Day rally will be “Hanap ng manggagawa: Makamanggagawang lider ng bansa.” Thus the labor coalition is giving notice to political wannabes that their early plunge to the 2016 elections is giving workers a bad impression, that their attention now are all in pursuit of their personal political ambitions and not the urgent demands of the working class.
Posted by Juan Manggagawa at 2:42:00 PM