War vs. "King of labor-only contracting" in today's World Day of Decent Work 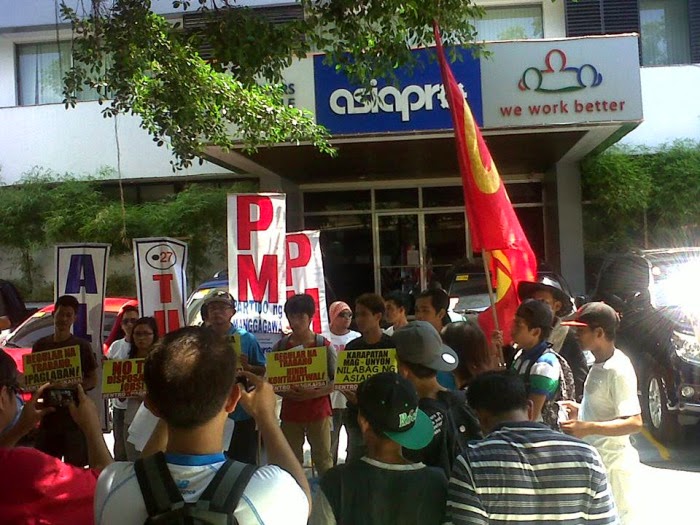 Press Release
NAGKAISA!
October 07, 2014
AROUND 200 members of labor coalition Nagkaisa picketed the Asiapro main office in Barangay Kapitolyo in Pasig City this morning to condemn the pseudo-manning agency for its gross violations of workers’ rights to mark the World Day of Decent Work observed worldwide today.
Below is the Nagkaisa labor coalition statement issued today:
“We, the Nagkaisa! (United!), join arms in condemning in highest and strongest terms the illegal practice being perpetrated by the Asiapro Multi-purpose Cooperative against thousands of vulnerable Filipino workers in its employ as we commemorate today the World Day of Decent Work along with other labor unions and progressive labor groups around the world.
We are enraged by Asiapro’s unfettered and multiple grave violations of international conventions on decent jobs and serious abuse of Philippine labor statutes that upholds the rights and interests of Filipino workers.
Behind its mask and by its pretense as a multi-purpose cooperative, Asiapro is a grand structure of deceit and an organized syndicate with a multi-billion peso profiteering from the blood and sweat of hapless Filipino workers.
The people running Asiapro are with pedigree, deeply-experienced and widely networked to camouflage and further entrench their labor-only-contracting fleecing operation. They are not just modern day labor slavery drivers, they are also rapacious and brutal not only for not giving the right wages and benefits for is workers but for skirting the laws and statutes by not paying millions of pesos of taxes that a responsible manning agency does to government.
As we join fellow workers in fighting for decent work, the Nagkaisa labor coalition today vows to make life difficult for Asiapro and promises to make its greedy high people running the organization be brought to justice.
In observance of the World Day of Decent Work, Nagkaisa today swears to uncover the Asiapro masterminds and make sure they will be made to account including all of the conspirators of the syndicate to pay for their abuse and injustice they have committed against thousands of its workers and their families.”
Posted by Juan Manggagawa at 12:20:00 PM