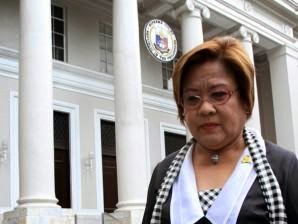 The Philippine Airlines Employees’ Association (PALEA) expressed disappointment at the failure of Justice Secretary Leila De Lima to get the nod of the Commission of Appointments (CA) yesterday. “We believe that Sec. De Lima possesses the integrity and capability necessary for the job of heading the Department of Justice. We know this from an up close and personal experience of working with her in entrapping a rogue public prosecutor,” averred Gerry Rivera, PALEA president.

Assistant prosecutor Diosdado Solidum, Jr. was arrested in an entrapment in August 2013 when he attempted to extort P2.4 million in return for dropping of charges against members of PALEA. Solidum was the DOJ prosecutor tasked with handling a PALEA petition to review a fiscal’s finding of probable cause for violation of Section 81 of Civil Aviation Authority Act (CAAA) pertaining to disruption and destruction of airport services and facilities during a protest against outsourcing in September 27, 2011.

In De Lima’s opening speech to the CA, she mentioned that she had no “qualms about ordering investigations and even entrapment operations against employees and officials of the DOJ.” Rivera added that “Solidum’s arrest and suspension would not have happened without De Lima’s cooperation and sincerity in cleansing the DOJ of rotten apples. It is thus pity a that she failed to be confirmed by the CA.”

PALEA called on the CA to confirm De Lima in the new hearing scheduled next week. “Good governance needs honest public servants like De Lima to be in position in government side by side with the active participation of ordinary people in the administration of the state. We hope for the best for Sec. De Lima in the CA hearing next week,” Rivera asserted.

The case against PALEA members for violation of the CAAA has since been dropped as part of the settlement agreement forged between the union and the new management of Philippine Airlines (PAL) in November last year. The agreement provides for an improved separation package and the re-employment of PALEA members who will be given priority for hiring in regular positions at PAL.
Posted by Juan Manggagawa at 2:24:00 PM

Wonderful article! This is the kind of information that should be shared across the web.
Disgrace on Google for no longer positioning this put up
higher! Come on over and consult with my website
. Thank you =)

Feel free to surf to my site http://www.ryansheavenlyroofing.blogspot.com/p/roof-maintenance.html