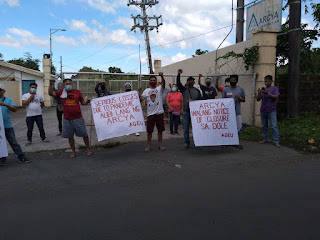 Workers of a glass factory in Laguna are spending their holidays on the picketlines as their labor dispute continues unresolved. Some 200 employees, about a dozen of whom are women, were terminated as Arcya Glass Corporation in Calamba, Laguna filed for permanent closure in November 16. However, the Arcya Glass Employees Union is accusing the company of union busting as the factory continues to operate with a reduced workforce.

“We believe that Arcya Glass is feigning closure as a way to bust the union and replace regular workers with contractual employees who will work for less wages and benefits. Despite the alleged closure, a skeletal force is working and trucks from Pedraja Trucking are ferrying bottles from the factory for delivery to Arcya’s customers,” stated Joseph Legada, president of the Arcya Glass Employees Union.

“The mass layoffs in Laguna and elsewhere are symptomatic of the pandemic of job loss that is happening without effective intervention by the government. This ties in with news reports that 4.5 million are unemployed this year and 2.2 million are also out of work but are not officially jobless only because they stopped looking for work. The restricted definition of unemployment limits it only to the jobless who are actively looking for work in the last six months,” asserted Rene Magtubo, PM national chair.

He added that “Moreover, we are seeing that capitalists are exploiting the covid-19 crisis to bust unions and shift to contract work. This is shown by the experience of the Arcya Glass Employees Union and the First Glory labor union in the Mactan ecozone.”

Last November 27 the garment firm First Glory Apparel in the Mactan ecozone fired 300 workers, including all the union officers. The union has a pending petition for certification election. A rally of terminated First Glory workers last November 30 was broken up by police and led to the arrest of five union officers and labor organizers. The so-called MEPZ 5 were later released as their cases for “disobedience to person in authority” were dismissed.

Arcya Glass put workers on one-month forced leave in March 15 as the covid lockdown started. The company then filed for temporary closure until October 15. Finally the company declared permanent closure on November 16. The Arcya Glass Employees Union has a pending case for unpaid benefits at the National Conciliation and Mediation Board and a complaint for illegal closure and union busting at the National Labor Relations Commission.

Magtubo insisted that “We demand that Labor Secretary Silvestre Bello convene a dialogue with labor groups on the continued hemorrhage of jobs inside and outside of the ecozones. We also ask Secretary Bello to remind police that existing DOLE-PEZA-PNP rules on labor disputes prohibit security personnel from harassing workers’ concerted actions.”

Photos of the Arcya workers protest can be accessed at