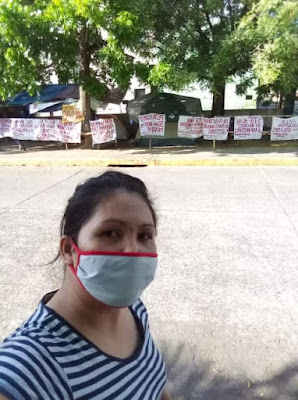 The group Partido Manggagawa (PM) slammed the dispersal of a picketline of economic zone workers in Dasmarinas, Cavite last night. From 8:00 to 9:00 pm last night, two Dasmarinas police backed up with scores of tanods of Barangay Langkaan 1 and 2 and security guards threatened two workers in the picketline, Jackie Elorde and Amer Taluba, with arrest if they will not leave the picketline. Workers of Korean-owned Sejung Apparel Inc. in the First Cavite Industrial Estate (FCIE) have been on picket-protest since December for non-payment of 13th month pay and other violations.

“We condemn the forcible dispersal of the picketline of Sejung workers in the dead of Black Friday night by modern Roman centurions—police, barangay tanods and security guards—in blatant violation of the law,” asserted Rene Magtubo, PM national chair.

He asserted that the DOLE-PNP-PEZA Guidelines of 2011 and the expanded version of 2012 which specifically includes barangay tanods prohibit interference by any security personnel in labor disputes. “The guidelines and labor rights are not revoked or suspended just because a quarantine is in effect,” Magtubo insisted.

He added that “The dispersal is the culmination of a three-week long attempt by FCIE to harass and starve Jackie and Amer into submission. Since March 27, all attempts to bring food and water to Jackie and Amer were stopped by security guards allegedly upon orders of FCIE estate manager Raffy Malanyaon. Guards maintained a 24/7 cordon sanitaire around the picketline in violation of the guidelines which mandate that police, military and guards should be 50 meters away and not interfere in peaceful picketing.”

“For more than four months, the Department of Labor and Employment provincial and regional offices did not act on a clear case of labor standards violation despite undertaking an inspection. The case has dragged on for so long that the covid pandemic and the resulting quarantine further aggravated the sufferings of the workers,” Magtubo explained.

The labor dispute is due to non-payment of 13th month pay, last salary and union busting. Sejung declared temporary shutdowns several times. The first shutdown in October last year occurred just one week after the union submitted a collective bargaining proposal and just three weeks after the union won a certification election. The company reopened but once more closed in December and has remained shutdown since then.