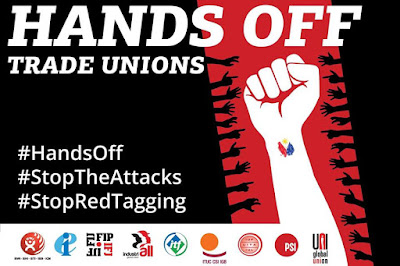 The state of human rights in the country continues to regress under the Duterte administration, the Partido Manggagawa (PM) said in a statement sent to media on the International Human Rights Day. The group joined the march by members of human rights community led by the Philippine Alliance of Human Rights Advocates (PAHRA) and i-DEFEND in Quezon City.

These assaults, Miranda noted, include red-tagging, misogyny, arrest and detentions, including unsolved killings of HRDs working for trade union rights and protection of the environment.

Last June, trade union leader Dennis Sequeña of PM Cavite was gunned down while doing lecture on basic trade union rights for EPZA workers. This incident, including other cases of trade union killings and violations, prompted the International Labor Organization (ILO) to send a high level mission to the Philippines to investigate the state of trade union repression in the country. That mission, however, is yet to be acknowledged and allowed entry by the government.

But for the group, the biggest threat to human rights in the country is the counter-narrative being peddled against its very concept and principles by no less than the President who keeps on vilifying the HRDs as bad guys working with society’s criminal elements.

“It’s very similar to having a company CEO who keeps on telling his workers that labor rights are bad. That mindset justifies all repressive actions while creating fear among workers that having a job is better than enjoying labor rights,” concluded Miranda.