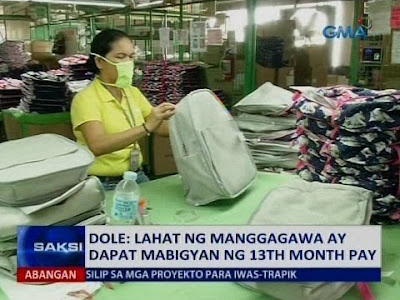 The group Partido Manggagawa (PM) today declared that workers should be on high alert against violations of their rights during the holiday season. The group announced this as the PNP declared yesterday that the country is high terror alert.

“Wage theft and other labor rights abuse are a more pressing concern for workers rather than bombing threats from terrorist groups. First on the labor alert list are employers who plan to steal the 13th month pay of their workers,” explained Rene Magtubo, PM national chair.

PM reminded workers that all private sector employees, including contractuals and kasambahays, are entitled to receive the equivalent of 1/12 of their total basic pay for the calendar year no later than December 24 as entitlement.

“The only condition of the law is that workers have worked at least one month during 2016. Wag tularan ang mga abusadong kapitalista. Like the giant shipyard in Central Luzon, P100 is deducted from the 13th month pay of its thousands of contractual workers for every day of absence within the year. Last month, an association of kasambahays estimate the half of domestic workers do not get 13th month pay or the full amount due them,” Magtubo insisted.

He added that “Next on the labor alert list are employers who do not pay overtime and holiday pay even as they force workers to do extended work to meet production demand and rush deadlines. These abusive employers are wage thieves. Forced overtime is actually illegal and workers who refuse to work beyond eight hours should not be penalized.”

“We are also on the look out for companies who have closed down and trying to run away from their obligations to workers. They are Grinches stealing Christmas from workers. One example is VTCT Business Technology, a call center in Baguio City that suddenly closed last November 4 and left workers with at least one month unpaid wages. Another is a BPO company in Cebu City that shutdown abruptly a few days ago without paying its 213 employees two months of salaries,” Magtubo elucidated.

The group also cited the case of the garments firm Faremo International which shutdown in order to bust the union and whose workers will spend Christmas at the picketline in the Cavite economic zone. “Management filed for closure due to lack of orders but one of its clients, the global brand Gap, has already admitted that they actually increased purchases for this year. We call on Gap and Faremo’s other clients, JC Penney and Kohl’s, to act on the workers complaints according to the terms of their supplier code of conduct which mandates respect for the right to unionize,” Magtubo averred.

“Likewise on our list are employers who obstinately refuse to regularize their employees even as the DOLE issues praise releases about 25,000 contractuals allegedly made regular. Despite mediation by the DOLE, Philippine Airlines has resisted re-employing the PALEA 600 as provided by a settlement agreement. Meanwhile in the Cavite ecozone, a Japanese-owned electronics firm has snubbed a DOLE order to regularize hundreds of its contractual workers after being found guilty of labor-only contracting,” Magtubo stated.

He said that “Finally we are on heightened alert as the DOLE is set to issue this month a new order on contractualization. We warn the DOLE and the government against betraying its promise of ending endo by surrendering to the ‘win-win’ proposal of employers.”