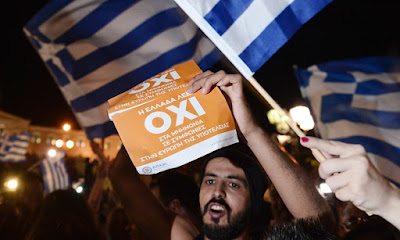 Partido Manggagawa
06 July 2015
Left groups in the Philippines, including the Partido Manggagawa (PM), greeted the jubilant Greeks for casting a historic vote against the third austerity package that is going to be imposed upon them by the International Monetary Fund (IMF), the European Central Bank (ECB) and the European Commission (EC) or what is commonly referred to as the “Troika”.
“The Syriza government should be congratulated for subjecting a major economic agenda to a political decision via a referendum where people can directly express their position to the issue.  And now that the great majority of the Greeks voted in clear defiance of the troika, the European Union (EU) is faced with a fundamental question on whether to push further with austerity measures decided by the banks and a small circle of UE technocrats, or yield down to democracy which principles also formed the basis of European integration,” said PM spokesman Wilson Fortaleza.
Fortaleza said the Greeks voted “no” despite their full knowledge of the consequence that there shall be no IMF/EU rescue money coming to Greece after their rejection of the bailout package, “Yet they have solidly defied the blackmail as they believed the new bailout package imposes the same program of deep budget cuts and more taxes while the country plunges deeper under the mountain of unpayable debts.”
The Greek people have been fighting the Troika-imposed austerity measures since 2010 as the country battled against the highest unemployment rate in Europe and the collapse of its welfare system.  At least 25% of the labor force is unemployed, with more than 50% belonging to the youth.  The price of education also soared, the cost and quality of healthcare significantly suffered, while the elderly keep a long wait for unreleased pensions.
The general rejection of anti-austerity measures led to last year’s election of a left coalition party Syriza under the leadership of Alexis Tsipras.
But for Partido Manggagawa, the Troika’s unyielding stand against Tsipra’s counter proposals for debt condonation, no new taxes and the revival of basic public spending programs, is not meant for the Greeks alone as it also showed how the EU would deal with other EU countries facing the same debt problems such as Italy, Spain, Ireland and Portugal. Anti-austerity movements are also growing fast in these countries and in other parts of Europe.
“Clearly the Syriza victory last year and the Greeks’ popular rejection of IMF bailout is something that the Troika wouldn’t consider as a triumph of democracy but more as a threat to their hegemony,” said Fortaleza.
The Philippine left could easily connect with the issued faced by the European people as the country had also been battered by IMF-imposed policies since the 80’s.  It was the IMF that imposed the policies of deregulation and privatization of public utilities which led to the escalation of prices of basic services in the country.
Posted by Juan Manggagawa at 3:42:00 PM