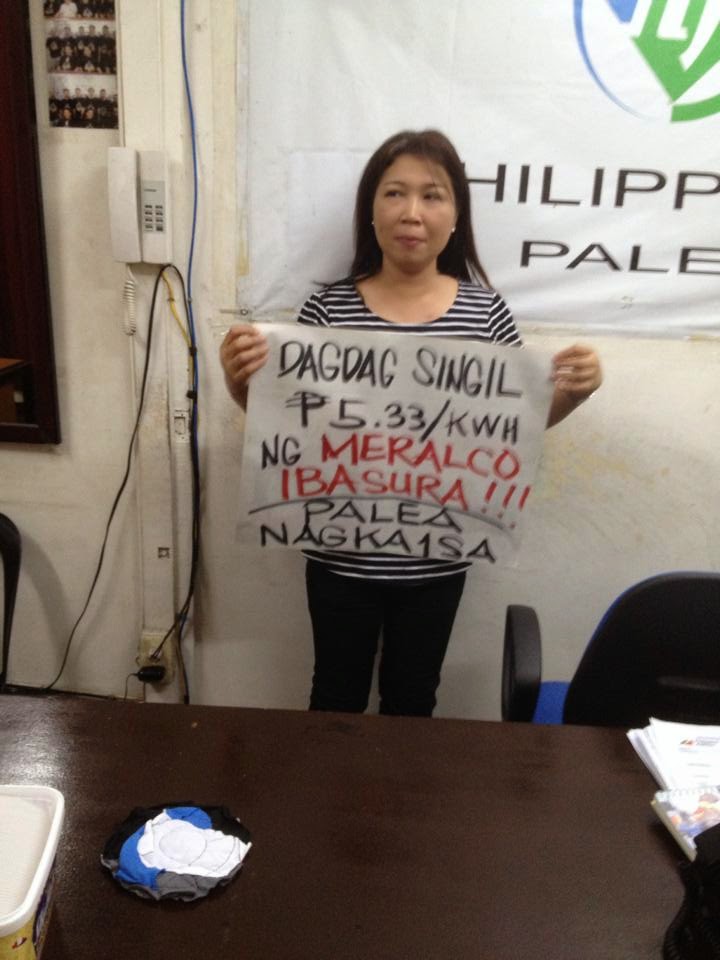 PRESS RELEASE
NAGKAISA
20 March 2014
Organized labor under Nagkaisa is insisting for no less than the full prohibition of the December 2013 and January 2014 rate hike, rejecting in effect the Philippine Electricity Market Corporation’s (PEMC) recomputed rate that is 80 percent lower than the approved market rate in December and January.
PEMC, which operates the Wholesale Electricity Spot Market (WESM), said on Tuesday that it had finished its recalculation of market prices in compliance with the Energy Regulatory Commission (ERC) order of March 3.  For the December 2013 billing, it set the new spot market rates at P6.007 (76.35 percent lower) than the P25.404 per kWh, and P6.246 (77.98 percent lower) than the original P28.367 per kWh for the billing month of January 2014.
“The numbers are out and PEMC’s recomputed rates bared all the elements of market failure.  We insist that any residual cost coming from this failure must be deemed unjust and therefore should not be passed on to consumers,” said Wilson Fortaleza of Nagkaisa power team.
Fortaleza, who is also the spokesperson of Partido ng Manggagawa (PM), argued further that in this particular case, the market failure was also a result of regulatory failure the more it should not be borne by the consumers.
He pointed specifically to the failures of the ERC and PEMC to regulate the market despite the expected tightness in supply due to the Malampaya shutdown and also being aware of official reports citing repeated occurrence of market abuse since WESM started operating in Luzon in 2006; and the failure on the part of the Department of Energy (DoE) to ensure reliable supply of power and impose sanctions on erring power plants.
Tomorrow, Nagkaisa and the Power to the People (P2P) network will stage a picket rally at the PEMC to call for the suspension of WESM operations, saying it is not the consumers but the rich owners of generation and distribution companies who profitably gain from this fraudulent trading scheme.
There are also reports that the PEMC Board, who are not independent but made up of the players themselves, receives fat compensations and other perks, including brand new service vehicles.


“We challenge the government to tell the people the truth that WESM won’t work in a very small and highly concentrated market ruled by certified predators in the power industry,” concluded .
Posted by Juan Manggagawa at 8:33:00 PM