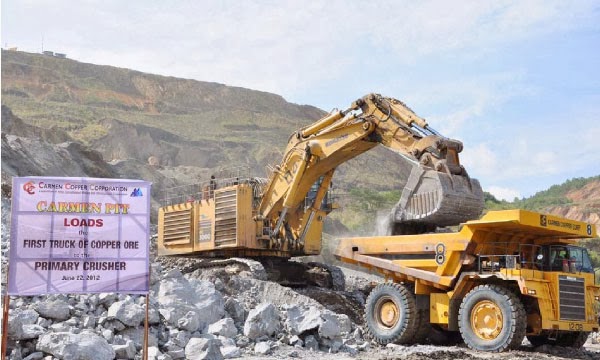 The Carmen Copper Corporation (CCC) management is creating a scenario similar to the 1980’s. An all-out attack against workers and repression of the labor union are in progress right now. But just as in the 1980’s, the old union called PAMA survived and won, we will again prove to the management that they have picked the wrong fight. We, the entire 3,000-strong membership of PAMCC, will stand our ground and we will prevail. It is because history is on our side.
It is our time to counter and fight back with all the means available to us. We will strike where it will hurt the most. Today we filed a Notice of Strike (NOS) before the NCMB on the grounds of CBA violations and unfair labor practices. We will respect the cooling off period but after that we will hold a strike! This will be a winner take all battle, its either us who will surrender or them. This is our demand. We’ve been here before and we’ve done this before. PAMA then is the PAMCC now.

During the rehabilitation stage of our Company, we fully cooperated in order for recovery to proceed. Indeed, from 2007 to 2012 not a single labor dispute took place. A harmonious relationship between labor and management existed at that time. Even though the salary was meager compared to the industry standard, we endured the sacrifice n the spirit of rehabilitation. In short, we let ourselves be used by the management in order for the company to take off.
CCC did take off after 5 years, earning P800 million pesos per shipment. The company was able to attract new investments like the Henry Sy group. CCC kept on expanding its operations with the workforce growing continuously.
But the management wants more from us. To further boost profit, the management must get rid of the genuine workers union – the PAMCC. At the final stage of rehabilitation, the management organized, supported and funded a company union – the CCWLO. It became clear that the last phase of rehabilitation meant busting the genuine union! But the management did not succeed because their own creation exploded in front of their face. CCWLO registration was cancelled and delisted from the roster of legitimate labor organizations.
The Management wants more from us. Little by little they are taking back the welfare and benefits enjoyed by the workers under our collective bargaining agreement (CBA). Medicine allowances are limited to only P6,000 per year. The next of kin provision on hiring of new employees is not being followed and instead workers not related to any of the union members are hired. Wage discrimination is rampant. Issuance of company uniforms are overdue. The Mining Act of 1995 is blatantly violated, specifically on priority hiring of residents of barangays affected by mining. Finally a double standard exists on the implementation of company rules specifically on AWOL cases.
The management wants more from us. Little by little they are contracting out jobs in the mine site that are necessary and desirable to the business of CCC while casual employees remain even beyond the six months of continued service in the company.
PAMCC will not take this sitting down. We will resist and fight back. There is no choice left to us but to end the 5 years of “harmonious relationship” between PAMCC and CCC. So far, We have been able to defend our ranks from the attacks of management but they are becoming more hard-headed and unreasonable.
Last year, management used the PNP to harass our leaders by conducting two illegal raids in the house and office of our union president and union treasurer. The raiding team planted explosives and ammunitions as manufactured evidence for the filing of criminal cases against our two union leaders. But the objective of their harassment was a complete failure. Our two leaders further deepened their resolve to fight for our union and workers. We raised the issue before the ILO, government agencies and human rights groups.

Two weeks ago, management used the DOJ thru the hoodlums in robe in the Toledo RTC to issue a warrant of arrest against our two leaders. This judge violated all protocols and process on issuing the warrants. Again, this will not succeed because all the charges are fabricated and therefore will be dismissed in due time.

We will be demonized by the management through its paid hacks in the media. That is why we are doing this media conference so that the public would understand us, the issues involved and why did we arrived at this decision.

MEMBER: NAGKAISA
Posted by Juan Manggagawa at 11:24:00 AM