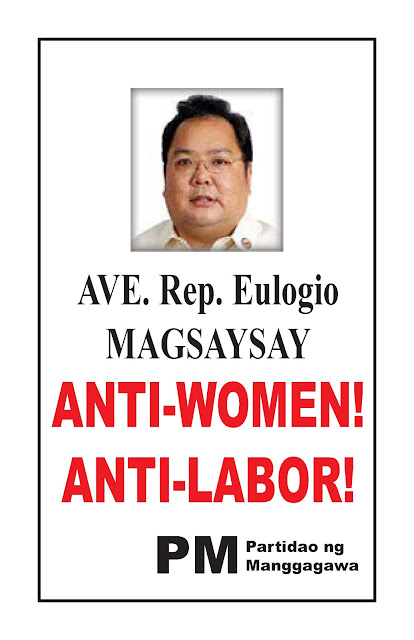 Women and men members of the Philippine Airlines Employees Association (PALEA) held a picket-rally this morning at the residence of Alliance of Volunteers Educators (AVE) Party-List Rep. Eulogio Magsaysay in Greenhills. This is to protest against his unbecoming conduct when he publicly shouted sexist remarks and threatened PALEA member Sarah Bonnin Ocampo with dismissal on 17 December last year.

The group, which included Ocampo, assembled around 10:00 am in front of Club Filipino together with members of the Partido ng Manggagawa (PM). PAL employee Ocampo alleges that Magsaysay threatened her with dismissal from work and of being a “menopausal bitch” in an incident at the Ninoy Aquino International Airport boarding area.

“We would like to seek justice for all aviation workers who are constantly experiencing disrespect and abuse from airline customers especially abusive politicians and government officials but have chosen to remain silent for fear of reprisal,” explained Ginalyn Licayan, head of PALEA’s Women Committee.

Ocampo plans to file both civil and criminal cases against the party-list representative. Despite being harassed by mysterious phone calls, she shall pursue the case with the full support of the PALEA, PM and various women groups which have expressed their indignation.

“Government officials, especially the likes of Mr. Magsaysay should realize that workers are human beings who deserve respect. It is truly an embarrassment that a number of ‘public servants’ in our country do not know how to conduct themselves accordingly. Bagamat may patakaran ang Civil Service Commission laban sa ganitong kondukta ng mga empleyado maging ng mga opisyal ng gobyerno, they can easily get away with it. Because government itself is complacent, as if arrogance is the acceptable mark of a true blue government official, which should not be the case,” asserted PM Secretary General Judy Ann Miranda.

“We cannot continue to allow government officials to use their position in maligning workers, especially those who undermine women workers’ right to be free from discrimination and sexism,” said Licayan.
Posted by Juan Manggagawa at 12:15:00 PM