Aside from the killings of trade unionists and activists, the country’s celebration of Women’s Month is ruined by Duterte’s dirty hands, the labor group Partido Manggagawa (PM) said in a statement.

Miranda insists that President Rodrigo Duterte’s act constituted sexual harassment of their kasambahay as the video clearly showed he was in the act of touching her. He was unsuccessful only because she stepped back just in time to avoid the contact.

PM likewise condemns Presidential Spokesperson Harry Roque’s defense of the president saying it was just a joke, and that she’s been with the family since young and is used to these sorts of jokes from him.

“Time and again, we have deplored the President for his sexism extending to misogyny for degrading women in the way he speaks and acts. This is another similar incident that we cannot just disregard the way Roque wants everyone to do,” explained Miranda.

The fact that the video was uploaded without regard to the sexual harassment act, with such an act done right on the face of her wife, and so with the spokesperson justifying the harassment, are totally unacceptable in a society that claims to respect and guarantee women’s rights.

The group said it’s a double whammy against women, especially among working women represented by the president’s kasambahay, who are facing so much difficulties during this pandemic because of government neglect and incompetence.

President Duterte’s downplaying of the impact of the new surge in COVID-19 cases is unsettling rather than reassuring, the labor group Partido Manggagawa (PM) said in a statement Tuesday, as the rise in new cases of infection is happening in the face of vaccine shortage and persistent unemployment.

Magtubo, who is also a City Councilor of Marikina, said this is no time for leaders to understate a lingering problem especially if this leadership is facing a backlash over its mishandling of the crisis over the last twelve months.

The President’s statement came after the #DutertePalpak hashtag trended online on Monday, coinciding with the anniversary of the declaration of hard lockdown in the National Capital Region (NCR).

It can also be recalled that when the World Health Organization (WHO) declared COVID-19 as a global pandemic, Duterte even poked fun at the virus, saying it will die a natural death even without a vaccine.  He also introduced using gasoline for sanitizing facemasks.

According to PM, aside from the 4.5 million jobless workers in 2020, many remain on a ’floating status’ after losing their jobs last year. And because they are out of work yet not being terminated, their status remains ‘employed but not at work’. The group said employers resort to floating their workers indefinitely to avoid paying them separation benefits.

Magtubo said the re-imposition of curfew, or worse, a new hard lockdown would discourage more workers to find new jobs or for businesses to resume full operations.

PM, together with Nagkaisa labor coalition, have been pushing for balik-trabahong ligtas and the rollout of income and employment guarantees to address unemployment problems and enhance the capacity of the state on health and climate response. 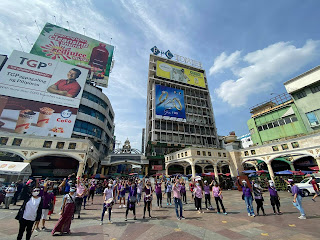 The labor group Partido Manggagawa (PM) said women workers suffered the most difficult year under the pandemic as the government, unconscious and unprepared to deal with the gender dimension of this combined health and economic crises, endowed families with only two months of ayuda during the past twelve months and treated everyone, old and children alike, as 'pasaway' under a militarized pandemic response.

Miranda said the unemployment problem also hit the women hardest, forcing women to leave their jobs and stopped looking for new ones as they have assumed more domestic responsibilities at home, including aiding their children on their online schooling.

And for those who remained at work in essential services and the manufacturing sector, women workers fought back against mass layoffs and non-payment of wages and separation pay as employers made the pandemic an alibi to cut the benefits or bust the unions.

The group said it is this higher level of sacrifice and the daily struggle of women that helped families survive a year under the pandemic, thus, their roles must be recognized and appreciated by the government by formulating short to medium-term programs for women.

These include income support, public employment, day-long daycares for working mothers; and also the most important political demand of women today - democratic spaces and a  violence-free environment – in contrast to the prevailing state of killings and authoritarianism under the Duterte regime. 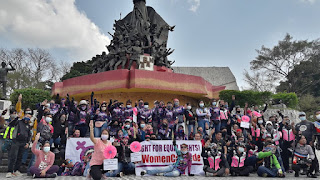 Hit hardest by the pandemic, women workers call for 'ayuda', jobs, and protection of labor rights

Mass layoff and income losses continue to mount despite the easing of restrictions and the initial rollout of vaccination. Needless to say, the combination of health, economic, and education crises one year under the pandemic is hitting women the hardest when they assumed added burdens as confirmed in several studies.

It is for this reason that members of the Nagkaisa labor coalition were demanding another round of ‘ayuda’ or income support, public employment program, and the protection of labor rights as the group kicks off with its celebration of the women’s month with a rally Thursday at the Department of Labor and Employment (DOLE).

Joining the DOLE action, Miranda said, were women workers who lost their jobs from the continuing company retrenchments, and those who have pending cases before the labor department over illegal dismissals, union-busting, unpaid wages, 13th month, and separation pay, among others.

A scheduled dialogue with the DOLE right after the rally may give workers from the export zones in Cavite, Laguna, Cebu, as well as the teaching and non-teaching personnel in private universities, a chance to seek immediate resolution of their cases and concerns pending before the department which they accuse of imposing social-distancing with the workers.

And as tensions rise between workers and employers due to this lingering crisis, workplace and domestic violence become common, further victimizing women in varying degrees, thus, the workers’ demand for the immediate ratification of ILO’s Convention 190.

“At a time when misogyny is now being normalized in various ways, ILO Convention 190 is precisely what we need today,” said Nice Coronacion, Deputy Secretary General of the Sentro ng Nagkakaisa at Progresibong Manggagawa (Sentro). Women workers were also demanding full protection of their rights as more employers resorted to imposing austerity and anti-union schemes, including union-busting.

"Using the pandemic as an excuse, Provision Gloves Apparel closed its factory in Batangas, only to find out that their main factory remains in operation, under a different name. Management is busting our union and avoiding collective bargaining. This should stop," said Jessica Guerrero, PGA Union-FFW president said.

For her part, Annie Geron, President of the Public Services Labor Independent Confederation (PSLINK), argued that quality public service requires a healthy and well-protected workforce both in the frontlines and administrative functions.

“Quality evades public service when bosses at the top are also the ones who deny their workers’ the right to form unions and bargain for better working conditions,” said Geron, referring to how senior government officials suppress unionization efforts of their rank-and-file members.